My Ongoing Education on PrEP 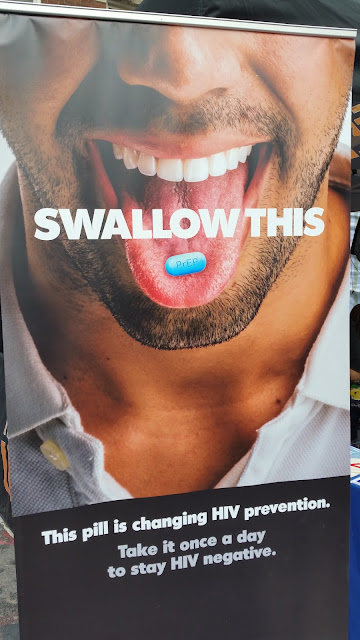 So a lot of conversations, among gay men, are being had about using PrEP in order to prevent HIV infection. According to the poster I saw at the Pride event over the weekend, PrEP or this pill is changing HIV prevention.

Aaron over at Relentless Egomania has been posting about of his exploration into using PrEP as his primary method of HIV prevention. Click here to see what his experience has been like over in Canada.

The San Francisco AIDS Foundation has also created an excellent site that answers some FAQs about PrEP. Click here for the website. A hat tip to Ms. Izzy for connecting me to this resource.

I have been considering using it myself, but have concerns about what the long term use of PrEP could have on the human body. I know with medications such as, Truvada, there is an increase in kidney function and lower bone mineral density. Moreover, I haven't even explored whether or not my insurance would cover the cost of the medication.

I need to get some answers to a few questions I have to make the decision.

Labels: HIV prevention is everything

SCOTUS Gets It Right -

Hallelujah, that the SCOTUS got it right in their decision legalizing same-sex marriage. At the end of the day everyone has a right to equal protection under the law.

Here is an excerpt from Justice Kennedy's majority opinion:

"No union is more profound than marriage, for it embodies the highest ideals of love, fidelity, devotion, sacrifice, and family. In forming a marital union, two people become something greater than once they were. As some of the petitioners in these cases demonstrate, marriage embodies a love that may endure even past death. It would misunderstand these men and women to say they disrespect the idea of marriage. Their plea is that they do respect it, respect it so deeply that they seek to find its fulfillment for themselves. Their hope is not to be condemned to live in loneliness, excluded from one of civilization’s oldest institutions. They ask for equal dignity in the eyes of the law. The Constitution grants them that right."  --Justice Kennedy

Now, for the folks that range from unhappy to down right outraged about the decision, I say this to you, "Get over it! Move on!"  There are other important issues to contend with, that directly affect you, which are occurring in our country, and on our planet. Why not put your energy into issues regarding the environment, public education, gun violence, racism, poverty, etc. etc.


So good people, I went to the Triangle Community Center's Pride In The Park 2015 event a couple of weeks ago. It was held in Mathews Park located in good ol' Norwalk, CT.

The headliners of the event is what motivated me to attend. I squealed when I found out RuPaul's Drag Race alumni Alyssa Edwards, Laganja Estranja and Shangela were going to bring their charisma, uniqueness, nerve and talent to the stage.

As I walked towards the stage, I passed the backstage area, and right there within spitting distance was Alyssa Edwards. Now, I didn't spit at her, instead,  I smiled and whispered the words, "You are awesome." Alyssa gave me a coy look and smile and seductively mouthed the words, "Thank you."

The girls put on a fun show. I was very impressed with how Shangela really gave it her all. Laganja made me gag when she leaped off the stage and went into a death drop. As for Alyssa, she was in mother mode, and kept it subtle but sexy. A good time was had by all.

BTW, a co-worker of mine accidentally saw a pic of Shangela when she was looking at other pics on my phone of a former student. She looked baffled and screeched, "What is that?" I chuckled and replied, "A drag queen." She then handed the phone back to me. I then laughed some more.