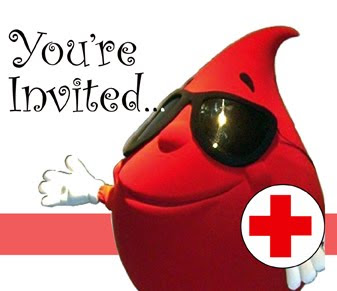 However, the following need not apply.
The Red Cross has an eligibility criteria for donating blood, which is a good thing. They want to make sure that people are safe while donating and that the blood being collected is safe for distribution. This is all very sensible.

However, there are a few criteria items that when you look at it really are just fucking silly. The first being that their policy excludes gay men from donating. This is the line in the criteria for donating blood that keeps yours truly from being allowed to donate blood:

-- are a male who has had sexual contact with another male, even once, since 1977 (source: American Red Cross)

The list then goes on to say you are also ineligible to donate if:

-- have had sexual contact in the past 12 months with anyone that:

-- used needles to take drugs, steroids, or anything not prescribed by a doctor
-- is a male who has had sexual contact with another male, even once, since 1977
-- ever taken money, drugs or other payment for sex since 1977

Now, I have a question. Shouldn't this exclude a large segment of the population as well? The way I see it many men and women cannot answer this question with 100% certainty.

How many women engaging in heterosexual sex ask their partner(s), "Hey, you ever had sex with a man, pimped yourself out, or shot up?" I would guess less than 15% of women ask this question.

The same goes for heterosexual men. I would guess .02% of men have asked their female sex partners the same question. Most men are pigs and just need hole and a heartbeat.

So, when men and women are asked this by the nurse, in all honesty most of them would have to say, "Not that I am aware of." or "I've never asked that question of my sex partners." Thereby, making them ineligible because they don't know the answer.

Oh and if you are from Africa, or had sex with someone from Africa, you can just forget about getting juice and cookies on that day, after helping out the blood bank.

Am I wrong in coming to this conclusion?

BTW, thanks Todd for bringing up this issue, while still encouraging people to donate. You gave me a post item. Oh, and Todd I had another snowday on Friday (Todd just growled people.).
Posted by Allan S. at 1/29/2011 08:06:00 PM 4 comments:

Labels: an oldie but goodie issue 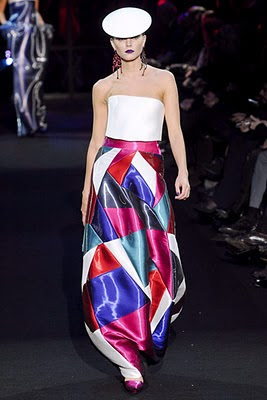 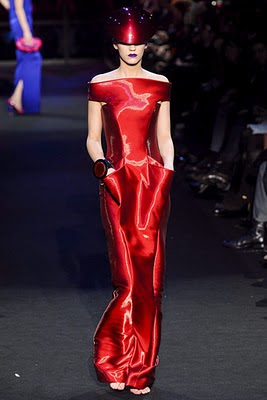 The couture collections have spread their magic. Click here to see what is next. Armani made me gag with these shimmering dresses that looked like electrically illuminated melted candy (see pictures above). I have to find the video to see how the garments moved.
Posted by Allan S. at 1/26/2011 10:36:00 PM 4 comments:

Another Snowday - Chillin' with Andy 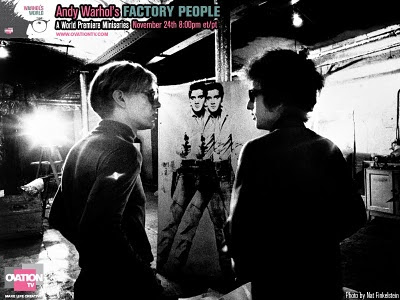 Today, was my fifth snowday from work! Todd just growled a bit. See the thing is the majority of students in my district are bused to school, therefore, the slightest occurrence of inclement weather results in school being closed. At this rate we'll probably have the school year extend into July. So, don't be to envious people, I'm playing now but will pay later.

Anyhoo, I decided to watch on tv, Ovation's airing of the documentary Andy Warhol's Factory People for like the upteenth time. I'm fascinated with the stories and characters. To see the surviving members of that crowd share insights and stories is amusing.

My favorite story is the one about Andy having Bob Dylan sit for one of his "screen tests" and Dylan was cordial and sat for two hours basically not doing much. Just being all aloof in that rockstar sorta way in front of the camera.

The kiki of the story is that when it was all done, as Dylan left the Factory, he saw the silver painting of Elvis with the cowboy costume and gun drawn (see picture above). He grabbed the painting and said to Andy, "Hey man, I'll take this as payment." To which Andy just stared at him and turned "tomato soup red."

Check Ovation's programming schedule for the next airing. It really is a fun and at times fascinating look into a modern mythical time.
Posted by Allan S. at 1/21/2011 03:45:00 PM 3 comments:

Good people, today was rough. I found myself missing Marcos and then frustrated that he is not here with me. I actually argued with him by talking to the air. I allowed myself that moment. Then I remembered that he fought long and hard, but was ill. While writing this I remember how handsome he was, and that I would love to give him one long kiss.

I know find myself, like I usually do, going back to the past. Today's therapy required me to revisit the music that ushered me into being a hip-hopper. I'm just visiting, but not staying. I needed a jolt of the old, in order to continue to allow me to move forward. When I heard old skool hip hop I was never the same. I found a profound connection to my time and generation. I was 12 years-old.

So this is about feeling a connection and accepting the time I am living within. I know there are some former hip-hoppers navigating life just like I am. Aint that right Renee?


This song will influence my movement into loving and vibing off of House Music. Yeah, I know the song in this video is very techno, but the subject matter and sonic vibe brought me to appreciate the scene at the Paradise Garage.

Labels: music is the answer

A Night With Spidey 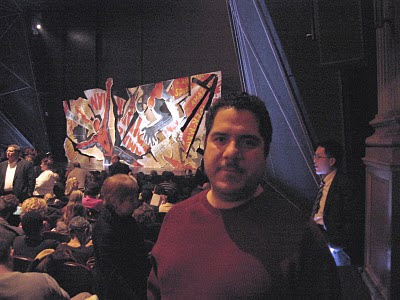 Okay so back in December I went to go see the Spider-Man musical! It was meant to be a night out with Marcos and my sister, alas, things sadly had changed.

I lifted m head up and went out to get back into life, and brought along two of my dearest friends that I've known since high school. Time with dear friends and a night out in NYC to see live theatre is just what my spirt needed.

Well, as many of you have read, the "Spider-Man musical" has been plagued with many problems. There have been canceled performances due to some scary moments that involved performers being injured. Most recently one of the actors that plays Spiderman fell over 20 feet into the orchestra pit when a restraining cable failed to break his leap. And, the lead actress playing Arachne, that suffered a concussion weeks ago, left the show this week.

Did someone connected to the show mentioned the Scottish play while in the house? It feels like the show is cursed.

What I saw that night was a preview and it's traditional to not offer a review while a show is in preview. It's just not fair. The directors, actors, musicians, et. al. are working out the kinks. So what I offer now is not a review but my own reflection on what I saw that night and that lingered with me.

- The proscenium is framed with this huge web that comes out into the theatre. Very cool looking and a perfect foreground for a comic coming to life on stage.

- When Spidey ran down stage in slow motion as the Brooklyn Bridge slowly ascended with Mary Jane dangling at the end, the audience cheered. I knew we were in for something new.

- Arachne descending from the heavens as she sang an ethereal song that told of her run-in with Athena was made even more surreal as the female members of the chorus swayed back and forth while dangling from long bolts of silk in order to weave a shimmering curtain. Genius!

- Watching Spidey fly above our heads was great fun. I gagged when he would land at different areas, because you can hear this thump when he landed, that let you know this was some serious acrobatics.

- The towering 3D televisions moved about the stage and illuminated the theatre to great effect. Seeing the Green Goblin 20 feet tall in techno-green while he taunted Spider-Man was particularly creepy.

- I admired the group of performers that really gave it their all. It must not be easy to try to get things right, while so many things have been going wrong. Great singing, great dancing, wonderful portrayals of their characters. America Olivio, the stand-in for Arachne, has a beautiful voice. The show must go on.

Okay, so maybe this was sort of a review. I guess I wanted to share that on that night I saw something that was really trying to take live theatre to another level. I wish all involved with the show the stamina and inspiration to make it work. 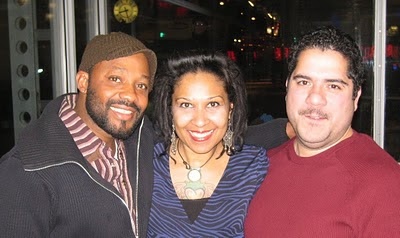 While dreaming about the future, I took a short glimpse into the past. I remembered how Thierry Mugler excited me about fashion with is vision and major fashion show productions. I even got to see one of his garments upclose and try on one of his necklaces when Willie Ninja walked for him back in the day. It made a then young gayling smile and feel fierce.

About 22 seconds into the video you will see Willie Ninja werk the Paris runway with his idol, the legendary Iman. I was so happy for Willie. He went from the projects of Queens, NY and served it in Paris and Russia along side a diva that he adored. Dreams do come true.

This is an amazing and fun fashion show extravaganza. They don't build shows like this anymore. Please note Thierry Mugler's fashion has become a major inspiration for many designers of today. He was really ahead of his time.
Posted by Allan S. at 1/03/2011 09:24:00 PM 3 comments: 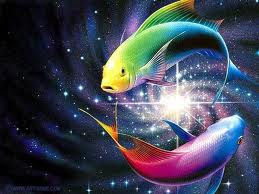 As Renee said in her blog "Like all the years before it, 2011 will offer the good, the bad, and the ugly." This is so true. As you know in 2010, I accomplished a major goal by becoming a certified special education teacher. I then lost Marcos who has been my partner-in-life for the past twenty years. Highs and lows is the natural flow of things.

I have resolved the following:

I will evolve my teaching skills to another level.
I will spend more time with the people I love and inspire me.
I will move forward from the profound changes in my life with love and grace.

Marcos whispered my name into my ear this morning. I smiled and it made him feel good. He's working his way to his next experience and I will do the same.

You take care of yourself good people. I wish you positive internal changes that will attract all that is beautiful in this life.
Posted by Allan S. at 1/01/2011 12:14:00 PM 7 comments: